The Kilns of Fuerteventura. 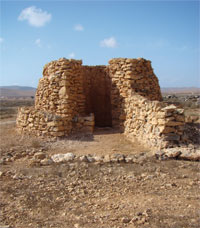 One of the constructions tourists frequently wonder about are the strange round structures all over the island that now are abandoned. Some are quite fantastic and apparently they seem to have played an important part in the former economic activity of Fuerteventura.
Many hundreds of years ago it was discovered that a certain plant, when burned, will produce sodium carbonate, used for the production of glass and soap.

That plant was named Barilla by the Spanish, the English equivalent is Glasswort. This plant is able to survive with little water and is tolerant of the sea air and the salt it contains. When it is burnt inside one of these ovens (Hornos de Cal), the ash – when washed – leaves a residue of Sodium Carbonate, which was highly prized and until the discovery of Sodium, was used to make the highest quality glass and the finest soap. We know it now as the cheap soda crystals we use for washing. Until the early 1800s there were many large plantations here and they were run by “Barilleros” who became wealthy as a result of their labours. It was an expensive investment to build the oven that made a good return and employment to many. Sometimes they were attached to houses but more often they are in isolated places because of the fumes and usually situated close to the crops. They would need a water source nearby to wash the ash so if you look around the Oven you should find a well or a cistern. You can encounter about 30 kilns on a trip 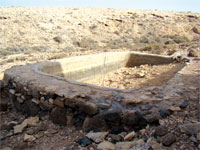 around the North and each one is quite distinct. Close by also would be the water source necessary to wash the ashes and remove the sodium carbonate which was then dried to form the crystals. The soap that was made from it was so fine and expensive that it was dedicated to the Royal House of Castille. Even today there is a soap product called Knight’s Castille.
The word alkaline comes from the Arabic name for the plant, Kali. “Al Kali” means “from Kali”. You will find the plant growing wild today on the beach and by the side of the roads but it is hard to imagine how that it was so highly prized it became illegal to export the seeds, with a possible death sentence! This is the large well at the Horno in Tefia. Many are in a bad condition as they can not be used for any other purpose. There are at least 3 in the Tindaya area and they are very grand and well worth a look. In Cotillo, Lajares, La Oliva and most other villages they still have one of these structures. It is quite eerie to stand by one and imagine the workers all around bringing in the crop and preparing the product. Now all gone, it is difficult to envisage what this was and how important it was. This picture shows the washing tank at the Horno in Esquinzo, a most fantastic site. If you would like to know more and find some of the best sites, please visit Bernie at the Tindaya Arms Bar in Tindaya for more information. Tel.: 928-865-595.
Bernie